A Walk With The Greatest Professional Golfer To Ever Play The Game!!!!

By NH Golfer Gal - March 12, 2020
Hi Gals,
If you saw the last post then you will know that I was in Florida and attended the first three days of the Arnold Palmer Invitational presented by MasterCard... if you haven't seen that post then go check it out before you read this one. 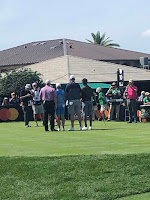 Wednesday was so unbelievable and such a dream come true! We got to the course somewhat early and my dad grabbed a pairing-guide and we made a quick plan about what we wanted to do for the rest of the morning. We had a great morning and got to see a lot of good players and get some good signatures! After we saw a few people come in from the pro-am my dad started to look at the groups and the amateurs going out in the afternoon because sometimes there are celebrities.... he showed me the amateurs playing with Marc Leishman at 11:50 and he jokes that you should have seen my face when I saw the names. Annika Sorenstam! 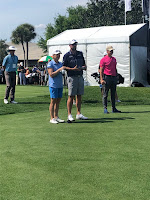 I couldn't believe it! Annika retired in 2008 when I was 2 and so I never had a chance to even watch her play on TV and I watched the PNC Father-Son Challenge and every time she is on anything on Golf Channel there is a good chance that I am watching and I have watched so many videos of her on the internet and I have learned so much from her and her swing (lookout for a potential new series on some of the people that have influenced my golf game and my life). Getting to see her play in person has been such a big dream of mine that came true that day! I was so happy and could probably have flown home from FL that afternoon with how much energy and happiness I had gained!
We saw her on her way to the tee and I said good luck. Then after getting Phil's signature, we went right over to the 10th tee where she was starting! She was playing with Marc Leishman (PGA Tour Player), Darius Rucker (lead singer in Hootie and the Blowfish and Musician), and Michael Robichaud (President of Global Sponsorships for Mastercard Worldwide). Marc is another one of my favorite players on the tour and getting to watch him along with Annika (and Darius and Michael) was so incredible and I had such an amazing time. 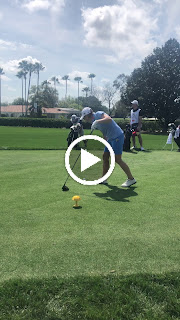 We ended up following them for all 18 holes and I recorded so many of her shots and took so many pictures. I got to talk to Annika a little bit as well as her husband Mike, Marc, Darius, and Michael. I learned so much and truly couldn't believe that it happened! I had maybe the best day of my life! Golf has changed my life and getting to see someone so incredible and such an amazing golfer play the game that she stood out in (and still does) for so many reasons was an experience I will never be able to forget!