Showing posts from March, 2021
Show all

By NH Golfer Gal - March 29, 2021
Hi everyone, Did anyone watch the WGC Dell Technologies Match Play this past week? For the past few years my dad, sister, and I have been filling out brackets with our guesses for who will win each match. I don't ever win but I have fun so that's what matters. This year's event was a big surprise and definitely exciting to watch! I don't think that even a computer would have guessed some of the people who advanced from their groups. As the week went on it got more and more exciting to see who was winning their matches, who was advancing, and who would be playing who in the next round. Congrats to Billy Horschel on coming out with the win and great playing to everyone! The LPGA Tour was in Carlsbad, California last week for the Kia Classic. There were so many great players in the field right now and Inbee Park ran away with the event! Inbee ended up finishing with a 5 shot victory over Amy Olson and Lexi Thompson who finished in a tie for second. It was also great to see
Post a Comment
Read more

By NH Golfer Gal - March 22, 2021
Hi everyone, There are just over 4 weeks until my 2021 tournament season starts, I can't wait to be back out there!  I have always been competitive and playing tournaments gives me an opportunity to be competitive, work on my golf game, and have a lot of fun while doing it. Another great part of playing in tournaments is that you get to meet new people. If I hadn't started playing in tournaments I wouldn't have met some of the people who have now become a few of my closest friends. Even though we are competing we are still rooting for each other to do their bests.  I played in my first tournament when I was 10 and I was hooked from then on. I started asking my parents to find more for me to play in and I haven't stopped. I have played in 54 tournaments since the summer of 2017. Won a few, lost a lot. I never get sick of the feeling of playing competitively. I've seen juniors get burnt out, lose motivation, stop having fun and that makes me sad because I couldn't
Post a Comment
Read more

By NH Golfer Gal - March 16, 2021
Hi everyone, 20 years ago today Annika Sorenstam shot her historic round of 59 during the second round of the Standard Register Ping! Annika made 8 birdies in her first nine holes and finished with 13 total for the round. She was playing with her sister Charlotta and Meg Mallon.  Her phenomenal round of 59 still stands as the only sub-60 round on the LPGA Tour. When will we see another?  ~NH Golfer Gal
Post a Comment
Read more
By NH Golfer Gal - March 15, 2021
Hi everyone,  I got to go hit golf balls this weekend for the first time off of grass since last October. I am so grateful to have the opportunities to go hit balls off of mats and use indoor simulators but there is something so much better about feeling the club go through the grass and being able to see the ball flight more like it will be when we get out on the course.  There are just under 6 weeks left until my first scheduled tournament of the season and I can't wait. I have been counting down since my last tournament of last year's season. I am looking forward to this season for so many reasons, including just being able to play the game that I love, hang out with my friends, and being able to practice and get better. What are you looking forward to this season? Also, who watched The Players Championship this weekend? It was an exciting final round! Congrats to Justin Thomas for coming out with the W and great job to everyone who teed it up this week!  ~NH Golfer Gal
Post a Comment
Read more
By NH Golfer Gal - March 08, 2021
Hi everyone, Who watched the Arnold Palmer Invitational this past week? It was nice to watch, remember the King, and reminisce about all my memories there. There was so much great golf played. What does everyone think about Bryson almost driving the par-5? Great job to all the players who teed it up, and congrats to Bryson DeChambeau on coming out with the win!  On the LPGA Tour at Golden Ocala for the LPGA Drive On Championship, there was also some incredible golf being played! The Korda sisters got to play together in the first two rounds and it is always cool to me to see their comradery and watch how much they are cheering one another on. The final group on Sunday was exciting to watch as Jennifer Kupcho was trying to catch up to Austin Ernst who didn't back down. Austin came out with an amazing 5 shot victory! Great playing to all the phenomenal players who teed it up last week, and to Morgan Pressel who took the booth with Golf Channel this week! Congrats to Austin Ernst!  Al
Post a Comment
Read more 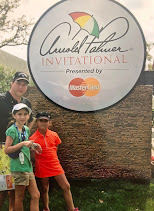 Hi everyone, This week on the PGA Tour is the Arnold Palmer Invitational presented by MasterCard, at Arnold Palmer's Bay Hill Club and Lodge. I have had the opportunity of attending this event for several years past and have made so many wonderful memories. Including interviewing Lauren Thompson and Cara (Robinson) Banks, meeting Annika Sorenstam, interviewing Danny Lee, meeting the guys on the Callaway tour van, seeing Arnie, and spending time with my family.  Unfortunately, due to COVID-19 I am not attending the tournament this year but look forward to watching it on TV and reminiscing about all the great memories I have made throughout the years. 2016 was the first year I got to attend this event. It was so much fun to be there, and experience it all. There were a few highlights of this year including hanging out with Danny Lee and getting a thumbs-up from Mr. Palmer himself. My sister had met Danny at the PGA Championship in 2015 and she had become a huge fan when he gave her a
Post a Comment
Read more

By NH Golfer Gal - March 01, 2021
Hi everyone, This past week was the Gainbridge LPGA, hosted this year at Lake Nona Golf and Country Club. It was a super exciting event for multiple reasons, Annika Sorenstam played her first LPGA Tour event in almost 13 years, Nelly Korda came out with the win to follow up her sister's win at the first LPGA event of the season, Gabriela Ruffles made her first start on the LPGA Tour as a professional, and we got a good look at all the stars on tour this season!  Annika had a great week! Most people didn't quite know what to expect as this was her first tour start in over 12 years and some people doubted she would even make the cut. She said she had low expectations for the week and was just trying to gain some competitive experience with the hopes of playing the US Senior Women's Open this summer. After a well-played round of +3, 75 including a triple bogey, bogey, and one birdie on Thursday, she rallied to shoot a -1, 71, on Friday to make the cut right on the number. Satu
Post a Comment
Read more
More posts