A Great Tournament at a Beautiful Course!

By NH Golfer Gal - July 12, 2021
Hi everyone,
On the sixth and seventh (last Tuesday and Wednesday) I played in the NH Junior All-Star Championship up at the Mount Washington Resort Golf Course and it was a phenomenal experience! The course was in phenomenal condition and the views, despite it being semi-cloudy both days, were gorgeous! 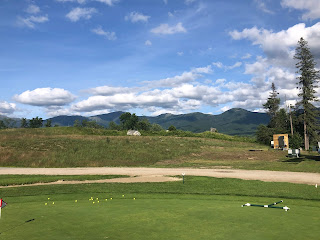 My grandparents took me and my sister up Monday night (thanks guys!) and we went over and had a chance to hit a few putts on the putting green and take a look at the scorecards. I knew the course was going to be similar to courses I have played in the past based on the layout and having played courses designed by the same person. After hitting some putts and knowing it was a resort course I knew the greens wouldn't be overly quick to maintain pace of play.
I teed off at 10:06 Tuesday morning and my sister was right ahead of me at 9:57 so we left the air b and b we stayed in for the few days with the goal of being there between 8:45 and 9. My sister and I decided we didn't really want to hit balls because it was a gloomy day outside and we wanted to get used to the pace of the greens when they were wet. I hit a few putts just to wake myself up, and then took a few full swings with my orange whip and then did some chipping and pitching practice both to the green and into the rough for distances. I had about 25 minutes at this point before I wanted to go to the tee to watch my sister tee off, so I decided I would hit some shorter putts to the edge of the fringe to get speed and stroke down. With about 10 minutes before she had to head to the tee Teagan, my sister, asked if we could have a putting contest together so we had a 4-hole putting contest (which she won). After that we were off! 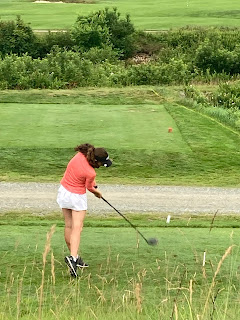 I pushed my tee shot on the first hole a little bit but I was still in the fairway and had a nice A-Wedge into the green. I landed it just short and it ran up getting caught in the fringe but I still only had about 12 feet for birdie. When it was my turn to putt I had read the break carefully and stepped over it to stroke it feeling confident. I ended up leaving the putt about two inches outside on the right and tapped in for par. To the second hole we went, I hit a great drive down the middle of the fairway and had a solid seven iron left to the green. I missed my second shot a little thin but it caught the right slope on the front of the green and rolled back to about seven feet left for birdie. I had the perfect line but disappointingly left the putt an inch short.
I was even headed to the sixth hole and the only par five on the front nine. I missed my tee shot left and it ended up bouncing into the hazard. But I didn't let that get me down, I took my drop and punched out past the trees leaving myself an easy 8-iron left to the slightly elevated green. Taking a few deep breaths on the way to my ball I got up there and pulled out my club waiting for the green to clear. I went through my preshot routine and took my stance. I ended up putting it to about 9 feet, on the way up to the green I realized I still had that putt for par, so I focused on it as if it was a birdie putt because it felt like it would be if I could sneak out of there with par. My playing partners both hit their shots as one was in the greenside bunker and the other was on the fringe on the far side. After they had both gone it was my turn and I was able to sink the putt and move on to the next hole still at even.
I made a rough bogey on seven, made par on eight, and then another bogey on nine but still made the turn at +2! We headed to the back nine which starts off with two par fives in a row, I made a great putt for birdie on 10 and then parred 11 and 12. I made an unfortunate bogey on 13 when I missed the green and was unable to get up an down. I then got back to my par streak making pars on 14, 15, 16, and 17. When we got to the 18th hole I was in a bit of a perdicament not knowing what to do because I hadn't seen the course before and left myself with a longer than necessary second shot where I was in between clubs and had to hit a severely choked up 7-wood that I missed left of the green. My chip didn't release like I wanted but I was able to save bogey to cap off a +1 back nine.
I ended up shooting a +3, 75 which is my career best and I was super happy with my round! I was one back from my friend June Doerr who held the lead and was going to be in the final group on Wednesday. Tuesday night I let myself celebrate the round I had just played but also made sure that I was staying focused headed into Wednesday. 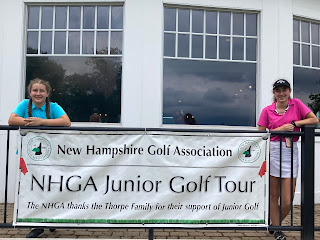 Wednesday morning we teed off at the same time and I was nervous but ready. There was an eight shot difference between me and the girl in third so I just went out to play my round and have fun! I knew that I was in contention and went into it with a match-play mentality.
I started off with four pars but then made three rough bogeys in a row. I stayed focused though knowing that I just had to play my game. I then made two pars to close out my front nine and headed to the back at +3 for the day and +6 overall. June was -1 on the front nine and now held a four shot lead.
I made a solid par on the tenth hole but when we got to eleven I struggled a little bit. I came up short on my third shot, leaving myself a tough chip which ended up going over the green. I then chipped on and three putted. I could have let the triple get to me but instead I made 7 fours in a row (bogeying the two par threes) to finish the back nine in +5. I finished with a +8, 80 on Wednesday which I was still proud of myself for! To put together another solid round after shooting my career best was a challenge that I am glad I was able to acheive.
I finished as the runner up, losing by 8 shots to June who played great all week long! All of the girls did amazing and it was a ball to hangout with everyone! 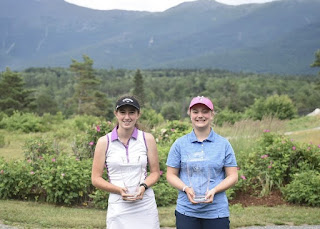 Despite not coming out on top it was a great tournament and I learned so much not only about my game and about golf but also about how I handle stressful and pressure filled situations. Putting these two rounds together gave me a boost of confidence and I proved to myself that I can compete at that level and that I was able to stay in it mentally even after a day where I really didn't get anything going and had a tough hole. Overall, it was a great tournament and I am proud of the way I handled myself. It was also a great learning experience!
I am so glad that I was able to play in this event and have the opportunity to test my game on such a wonderful venue and in an event that I wanted to do well in! Thank you to the NHGA for putting on the event and to the Mount Washinton Resort Golf Course for hosting! Great job to all of the players who played in the event and congrats to June Doerr and Ben Dougherty on winning their divisions! Looking forward to this event next year!
~NH Golfer Gal