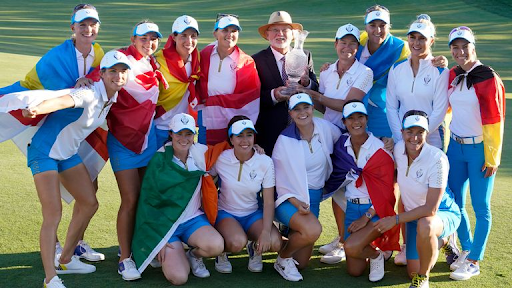 Hi everyone, Congrats to Team Europe on a phenomenal win at the 2021 Solheim Cup! The strong European team led after each round and made it look as though they were going to run away with it early in today's singles matches the US team made a bit of a run but didn't have a chance to get all the way there when Matilda Castren sunk a putt to retain the cup for the Europeans.  Credit: Sky Sports As always watching the event is so inspirational and having two women from New England on Team USA was awesome to watch! It's so motivating to watch and hope that someday I could be on that stage competing to bring the cup to the US.  The European team played incredibly this week and rookie Leona Maguire was the only player to play all five rounds and finished with a 4-0-1 record securing 4.5 of Europes 15 total points. Leona has got to be the MVP of the week! Great playing to all of the players and we can't wait to see what 2023 will bring!  Keep your eyes out for an upcoming post
Post a Comment
Read more
More posts