What a US Open and Father’s Day!

By NH Golfer Gal - June 21, 2021
Hi everyone,
This past week was the US Open and what an exciting event it was! The event was contested at Torrey Pines in San Diego. The course was playing difficult all week long with brutal rough.
There were a bunch of names at the top of the leaderboard all week but it came down to Louie Oosthuizen and Jon Rahm! Watching Rahm down the stretch was unbelievable, as he made two clutch putts on his final two holes. Louie got into some trouble on the 17th hole that ended up leading to another runner-up major finish.
Seeing Rahm embrace his family and then killing time between when he finished until the final group hit their approaches and he knew he had won his first major championship. Just imagining being in his shoes and having your family there, must have been such a special moment. A great way to spend his first Father's Day, celebrating his first major with his little boy Kepa and his wife Kelley! The wait however I can only assume was excruciating with it being out of your hands.
It was great playing by everyone all week and a finish that was exciting until the last putts rolled in!
Yesterday Nelly Korda also captured her second LPGA Tour victory of the season at the Meijer LPGA Classic for Simply Give! She won with a two-shot victory over Leona Maguire who has been playing phenomenally lately. 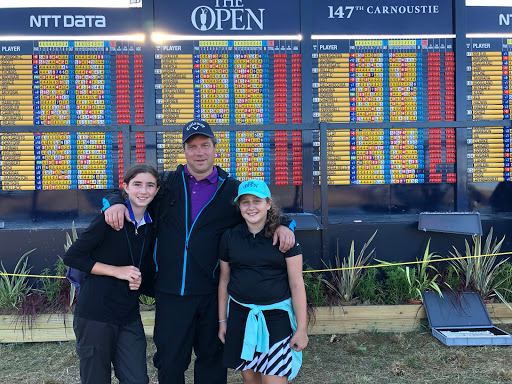 This weekend also happened to be Father’s Day. So HAPPY FATHER’S DAY to all of the incredible dads, stepdads, grandfathers, and all who the fatherly figures in our lives! We are so thankful for you and all that you do. I am so lucky to have such a great dad who has introduced and taught me how to play golf, driven me to and paid for tournaments and lessons, helped me with homework, and has been there to teach me life lessons along the way. Thanks for all the endless love and support. I love you Dad!
~NH Golfer Gal