My first two days at the Arnold Palmer Invitational!

By NH Golfer Gal - March 10, 2020
Hi Gals,
I went to the first three days of the Arnold Palmer Invitational (API) and had an amazing time! We spent Monday hanging out around the putting green and driving range or between one and ten watching the pro-am. My sister and I got a lot of signatures and then we decided to stay for the Jr. Clinic which started at 4:30 so we hung around and watched some people practice until then. This year's Jr. Clinic's pro was Rob Oppenheim from MA! We got a lot of cool tips and I look forward to attending again next year.
On Tuesday we spent the morning just getting signatures and watching golf. Then we went over and sat down for some lunch... after we got food my dad went over and checked the short game area and came back to the table and said: "Girls, you are going to want to get your stuff together...". I asked why and he replied with "Annika is over there!" That was all it took before I was halfway over there. She was filming a commercial or taking pictures or something I'm not entirely sure but we watched her for a little bit while we also watched some of the players chip around and we got signatures from some of them too. About 45 minutes later she wrapped up what she was doing and started walking towards us! We asked her to sign our flags and I said something along the lines of 'I am NH Golfer Gal, you answered questions for my blog!' and she made a comment about how tall I have gotten since I first met her! It was amazing to get to talk to her and when I mentioned something about a clinic in NH that I had mentioned to her foundation a few times in the past she said it was still on the table for the next few years! It was an amazing day and one I didn't know if would be topped for a while. 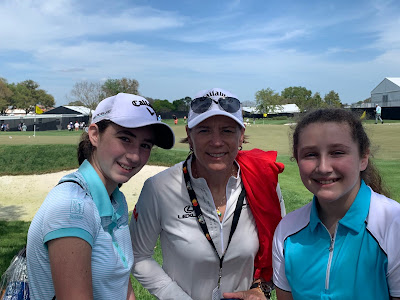 By NH Golfer Gal - April 19, 2021
Hi everyone, Have you been out on the course yet this season? I have played a few times and it feels so good to be back out there. Even though I practiced all winter hitting balls indoors and off of mats it isn't the same as the feeling of being able to play. Coming back after the winter takes some getting used to having to hit different shots and read different greens but it starts to come back to you. There is less than one week before my first tournament of the season and I am beyond excited! I am excited to see some of my friends and kick off the 2021 tournament season. This week the LPGA was in Hawaii for the Lotte Championship, an exciting change to the schedule having the tournament run Wednesday-Saturday. The scores were incredibly low and it was exciting to watch them fire at flags! The Korda sisters had another strong week with Nelly playing herself into her third final group of the year! Lydia Ko, after a strong first three rounds, played a great final round to play hers
Read more

Hi everyone, This post is a bit different from things I tend to talk about but it's the reality of my journey to date having played two full seasons on my high school's varsity golf team as the youngest player and as the only girl. Please take the time to read this because I am sure that there are other people with similar experiences, be it under the same circumstances or different.  I apologize for the long delay in this post. I have been busy focusing on school and golf for the past few weeks and didn't find the time that I felt this post deserved as it is a big one.  Last season (for more details about last season check out those posts) I was a freshman and things were challenging with us being remote for school and everything going on with covid. However, the "team" didn't truly feel like a team and we never really did anything to help us come together. I discovered early on how prevalent issues of sexism, disrespect, lack of caring, and selfishness wer
Read more